Art Heals Whether You Engage in the Creative Process Yourself or Not! 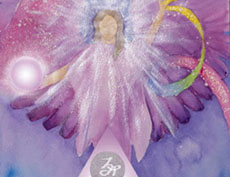 As Tammy entered her college studies with enthusiasm, she quickly learned that she could silently communicate her inner chaos. The inner struggle was caused by the near death experience (NDE) in 1983, and the subsequent inability of everybody around her to talk about the fact that Tammy stared her mortality in the face. The images of Jesus as well as the pain she carried slowly came out through her art. What Tammy didn’t know was that the images she drew, painted, and sculpted were identifiable by others who had similar experiences.

Sr. Lucinda Hubing, who quickly became Tammy’s mentor and good friend, recognized the symbolism of tunnels, the light, spirits, Jesus and other spiritual images as a call for help and understanding. Before she admitted it to her, she knew Tammy had been through an enlightening spiritual experience along with much physical and emotional pain that were life changers. For the first time since the accident, Tammy was confronted by somebody who knew what she had been through, somebody willing to listen, and ready to witness the horrifying ordeal.

She held space for Tammy while she used her art to describe the accident and all the details it included. Tammy slowly began to find inner peace through art making, and quickly learned that it took her places within herself that she had never been before. For Tammy the creative process is meditative, a time for soothing the mind and body while allowing for connection to soul.

Several years later, Tammy was standing at her easel contemplating the addition of yet another layer of paint on the canvas when she was asked by Archangel Gabriel if she wanted to learn to heal herself. Tammy soon connected to the Divine beings who saved her life many years before, and would step in once again.

Tammy’s art became a way for Spirit to communicate with her until she developed her other intuitive knowing skills. Without art, the awakening and healing she received may have never occurred. Through Tammy’s work with the Divine she soon learned that you can heal through viewing images and symbols without being involved in the actual creation of them.

Shortly thereafter, Tammy began creating curative art for people who needed a powerful healing tool, meditation focal point, or wanted to be surrounded by a continuous outpouring of Divine love. Curative Art became a great addition for clients who wanted to be surrounded by continuous Divine healing energy following a session, or needed a long term solution to chronic 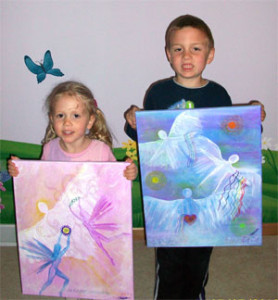 problems. It was apparent that others healed when simply in Tammy’s presence. If they were engaged in their own creative process they reached deeper spiritual experiences and often opened to healing at depths beyond all expectations.

An example of this would be that of a woman in a group art therapy exercise Tammy was facilitating. As the participants painted, she began crying. Tammy approached her to ask if she needed anything, and she exclaimed that she was being healed. She further explained that she had a ruptured disk in her back and a hip injury that she had been suffering from for over a year. She knew her spine and leg were instantaneously healing because she allowed herself to open through the art. A few months later, she had regained all mobility and no longer needed surgery. Tammy was shocked! A whole new world of creative possibilities opened up that day. She is honored to offer both general and individualized art that heals.

For more information and pricing, please follow the link below: